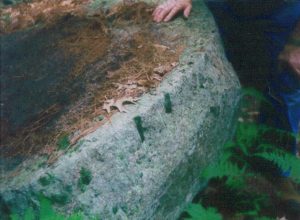 Throughout Upton State Forest you can see evidence of stone cutting on granite outcroppings as well as stone lying in the forest. You will see marks created when the stone cutter placed his “feathers and wedges.” He used two tools called feathers placing them opposite each other along a line in the stone. Then he used a mallet to drive iron wedges between them at intervals. By repeatedly striking the wedges in sequence they eventually made the stone crack and break away from the ledge. Not always an exact science there were times when the stone did not break as planned so it was left where it fell.

The late Carl Anderson referred to an area near Middle Road Trail as “Pilkington’s Quarry”. Alexander Pilkington was one of four brothers that came from Ramsbottom, England to Upton around the beginning of the Civil War. They had evidently learned the stone cutting trade before they came here. All but Alexander passed away before 1873 but he continued the trade until his death in 1918.

The Pilkington’s cut stone was used for cemetery monuments, horse troughs, building foundations and mill stones.  On the east side of Middle Road Trail, you can see round cut stones that were intended as mill stones but either broke while being transported or cut.

There are no upcoming events at this time.