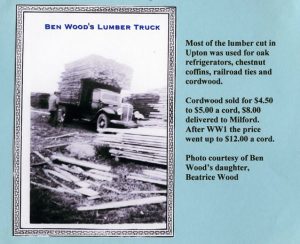 Portable saw mills were made possible around 1821 with the development of steam saw mills powered by burning wood slabs. These mills were moved to the site being cut and employed from ten to fifteen men depending on the size of the wood lot and back-log of timber waiting to be cut.

When these mills were moved it was like the circus coming to town with people running from their homes to watch the parade of wagons carrying the components. Four horses pulled the boiler, and in mud season two horses attached to a pole pushed from behind. In swampy areas, oxen were used since horses would be nervous because of the poor footing.

At the site, two clearings were made to set up the mill and to stack the lumber. Water was necessary to power the boiler so the owner studied the land setting up on the side of a hill near a water source

One local logger, Ben Wood, owned a number of parcels that are now a part of Upton State Forest. According to the late Carl Anderson when other jobs were slow Mr. Wood set up the mill off the Westborough Road between the two ends of Ridge Road. At other times the mill was set up in Upton, Mendon, Hopkinton or Westborough or as far as Hubbardston.