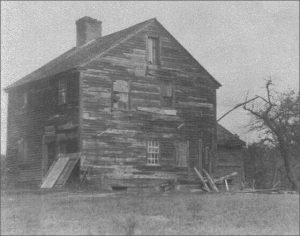 In 1982 Gordon Hopper, a Milford Daily News reporter, reported that he found 16 cellar holes and identified nine home sites. He also located sawmill sites, water holes and three old dams. All of these sites were connected by a network of roads that led from Upton to Grafton, Hopkinton, Westborough and beyond. Some of these roads are incorporated into the existing trail system at Upton State Forest. Nash Road was a long narrow dirt road running between Gore Road and the former Tucker Farm on Southborough Road.

Friends of Upton State Forest formed a Resource Inventory Team that located and documented many cellar holes sites within the forest.

In 1983 Carol Johnson Blomquist and John Morrill developed 1735 and 1798 lot maps from research they did on early homes. The 1735 map shows the home of Benjamin Stuwart near a brook, but no road. In 1798, the map shows an unnamed road intersecting with the road to Westborough at Pratt Pond. (Hopkinton Rd. and High St. did not exist.) This road (today Gore Rd) headed northeast toward Hopkinton through the properties of Jason Bathrick, A. Sadler, Ezra Whitney, Samuel Forbush, Daniel White, and a section of common land. This map, and records as early as 1792 indicate a mill and a nearby home on the Forbush property at Anderson Brook. As late as 1851 maps still showed Gore Rd. continuing past the mill toward Hopkinton, but since 1938 Gore Rd dead ends at Dean Pond.

The 1851 map below shows a saw mill at this location and names the house as belonging to N. Gore. 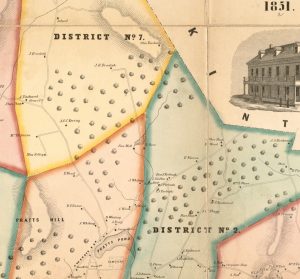 While building Dean Pond Dam in 1938 Civilian Conservation Corps enrollees uncovered remnants of the old mill works. At that time, Fred Alexander, a long time Upton resident said that the Gore Dam washed out in 1882 ending a period of over 100 years as a productive mill site.

An early Upton census also shows a cider mill located at one of the cellar holes off the Hopkinton Spring trail. A probate inventory for Ebenezer Stearns shows that he had many casks for cider storage.