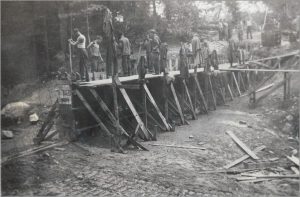 Built in 1938 by the men of the Civilian Conservation Corps, Dean Pond is a popular destination today at Upton State Forest. Twenty seven men worked on the crew building the dam except for the days when the cement was poured and then additional men were used.

The dam was constructed in four separate pouring’s. The cement was mixed on site and poured into the forms from wheelbarrows pushed by the men. The two spillways were constructed of field stone collected from the area around the dam and placed by hand. As a third overflow precaution an outlet valve was placed near the center of the dam.

Project leader was Joseph Petrowski, CCC enrollee. Mr. Petrowski would meet with the Camp Superintendent, P. J. O’Malley once or twice a week to review the plans and get his instructions. Alan Frost was the Project Supervisor.