As our country grew so too did its need for lumber to build homes, barns and factories. Families needed lumber for furniture and cord wood to heat their homes. Farmers needed open land for pasture and the railroad needed railroad planks and ties. The logging industry provided jobs and the nation thrived as the forest disappeared.

In the late 1800’s people became alarmed at the clear cutting that was causing erosion and destroying wildlife habitat. Slash from the logging operations fueled fires often set by the passage of the railroad engines spewing sparks. Elected officials everywhere were being pressured to do something.

In 1914 the Massachusetts State Legislature created the State Forest Commission. $90.000 was appropriated to purchase land with the stipulation that not more than $5.00 an acre be paid. The first purchase at what was to become Upton State Forest was  the “Gaskill Lot” located near Hopedale.

In 1929 “The Report of the Governor’s Committee on Needs and Uses of Open Spaces” was published along with perhaps the first Massachusetts open space map.  The report found, as is true today, that “State Parks and Forests, with their recreational opportunities, cannot be too fully or broadly planned for their ultimate need.” 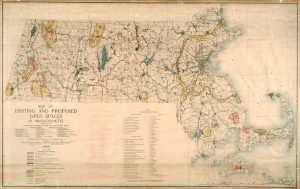 Around 1933 and 1934 the state began purchasing other parcels in Upton and surrounding communities. Many of the parcels had been owned by loggers who purchased the land, logged it and then sold it at a greatly reduced price as sprout land. In the North Upton area, most of the parcels were purchased from Benjamin Wood, Knowlton Farms and others.