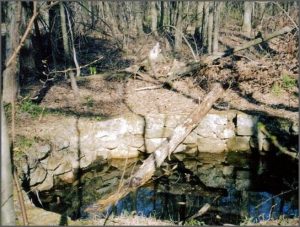 A water hole built by the CCC for fire protection.  (E. Arnold photo)

In May of 1935 twenty three men from the 102nd Company, CCC at Plymouth came to Upton to clear a camp area at the newly designated Upton State Forest. Later that summer another 187 men of the 2105th Company, CCC from Ft. Devens, MA arrived to start the emergency conservation work that was the mission of the Civilian Conservation Corps.

Known as “Roosevelt’s Tree Army” the men of the Civilian Conservation Corps wasted little time getting to work once they arrived in Upton. From August 12, 1935 when they arrived until November 9, 1938 when the last contingent left, they transformed the land into the park we know today.

At Upton there was grave danger of forest fire due to the acres of slash left from clear-cut logging. The CCC “boys” made and burned brush piles leaving a few piles for wildlife cover. This was also a period of gypsy moth infestation so they destroyed thousands of egg masses. During the years they were here, they planted over 230,000 trees and shrubs mostly red and white pine, gray birch, red maple, juniper and blueberry.

Before they left Upton, they had constructed about six miles of truck trails including Park Rd. that started at the service area and led to what would become Dean Pond. Today this is a major trail at the park leading from the trailhead parking area. The Hurley Truck Trail started at a point on Westborough Rd. running about a mile to a point on Warren St. This was done because that section had experienced several forest fires including one that started at the Town Dump on Warren St. burning 150 acres of forest. 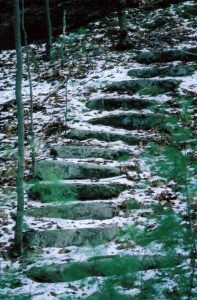 Along Park Rd. and Loop Rd, they made picnic areas with fireplaces and parking areas for cars. They cut open vistas at scenic locations placing stone steps to them. Today there is little evidence of these areas, although the stone steps are there if you know where to look.

In an interview with CCC alumnus, Joseph Petrowski, he spoke about an area at Upton State Forest known as Painted Valley. He said that when you stood on the hills of Upton State Forest looking east down the valley during the fall it was if an artist had painted the colors.

They constructed several water holes at Upton State Forest that were intended to be available to fight forest fire if necessary.

Some of the time was spent doing survey work at the various Upton State Forest parcels. Plans had been made for recreational development along the West River in the southern part of Upton. This was never done because the camp closed in 1938 and the men were transferred to Salisbury Beach to develop that park.

In addition to working to restore the land, the Corps helped local communities when there was a need. Here in Upton, in 1936 flooding washed out the Wildwood Dam washing out several hundred feet of Route 140. The men of the CCC were able to make the road passable in one day. Access on this road was critical to Upton’s economy because the hat industry transported their goods to the railroad in Grafton.

On one occasion an enrollee rescued a young girl who had fallen through the ice on Mill Pond. In 1937 they were part of a successful search and rescue effort for a missing two-year-old child.

Although the people of Upton were apprehensive when the camp opened, by the time the men left in 1938 they were an accepted and welcome part of the community. 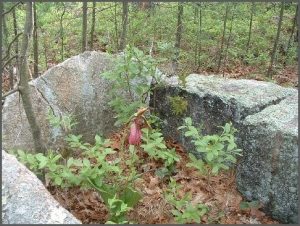 See also this Video “The CCC in the Blackstone Valley”