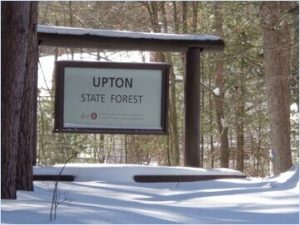 Originally there were 17 buildings in this complex, but some were torn down, while others collapsed from snow load. The 1938 Hurricane blew down a garage that was in the east of the complex near the area now used as a trailhead parking lot.

A National Park Service plan shows the original intended layout of the camp buildings. Interviews with former CCC enrollees tell us that the plan was not followed exactly. During the CCC period the Supply Building was to the immediate right as you entered with the Recreation Hall/Post Exchange on the left, parallel to the Headquarters Building across the Parade Ground. Next to Supply was a building with the latrines and showers, with the Mess Hall located next to that as you drive along the west side of the Parade Ground toward the Headquarters Building. On the East side of the Parade Ground there were three barracks that housed enrollees. Officers and Forestry Supervisors were quartered in the East and West ells of the Headquarters Building. Cooks and bakers were most likely quartered in a small barracks area in the Mess Hall building since they had to get up very early to start preparing meals. Eventually, a small Schoolhouse building was moved from the Blue Hills Reservation to Upton and located to the east of the Rec Hall. At the entrance to CCC Way there is what appears to be a former CCC loading dock. It is in close proximity to the Supply building and PX in the Recreation Hall. The maintenance garages and other workshops were located in the area east of the Camp around the area used as a trailhead parking lot today. There is also a small foundation for what may have been a dynamite shed near a CCC built waterhole in that area.

Witness trees, including Sawara cypress and Northern white cedar, along with other bushes were planted as shrubs near buildings around 1936 to dress up the camp area. Today, they mark the footprint of buildings that are no longer there, standing as sentinels of the past, and allowing for interpretation of the historic site. The pictured location is the front door area to the former Mess Hall.

What makes the camp at Upton State Forest unique is the extant buildings. Normally, when a camp was closed the buildings were torn down and the materials used to build another camp elsewhere. The reason that didn’t happen at Upton is a continuous occupation by various entities. Camp SP-25 was closed at the end of 1938 and custody was given to the National Youth Administration (NYA) to be used as a vocational type school for youth. Camp Young Judaea followed as a summer camp for urban Jewish youth. With the war years following soon after, the site was turned over to the State Guard, named Camp Stover, and used as a training camp for officers. At that time, the former infirmary became the Headquarters for Brigadier General Erickson. During the Devens Maneuvers men being moved from Camp Edwards on Cape Cod on their way to Fort Devens were bivouacked here overnight.

In 1946, following the war the Massachusetts Department of Fish and Game took over the site for their first state Field Headquarters. It became Phillips Wildlife Lab, named for the noted conservationist, John C. Phillips.  Prior to this, the department was not centralized, but had personnel that worked from their homes or small offices throughout the state. Many wildlife projects and research were managed from this Field Headquarters. At this time, some of the buildings were put out to bid to be dismantled and moved to other places. Some employees rented apartment space in the former barracks buildings and lived here with their families. In 1956, the department vacated the site and moved to Westborough.

After that, custody of the site was given to the agency that ultimately became the Department of Conservation and Recreation (DCR) in 2003, which owns and manages the site today. Since 1956 there have been several departments that had a presence there, including the Bureau of Forest Fire Control and Forestry. District Forester, Paul Hannon lived in the cottage with his family and had his office in the east ell of the Headquarters Building. At one point, the North Barn housed forest firefighting equipment. Later, the barn was used by the Department of Environmental Management’s mounted unit as a stable for horses.

In 2014, the CCC Camp site and a corridor of associated resources was listed on the National Register of Historic Places. This was sponsored by the Upton Historical Commission with funding from Upton’s Community Preservation Funds. The Friends of Upton State Forest Cultural Resources Inventory Team and members of the DCR Office of Cultural Resources supported this effort.